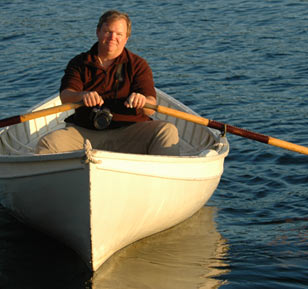 Jim Dugan came to Maine in 1989 to study photography at the Maine Photographic Workshops (now the Maine Media Workshops). He stuck around, working first as a photographer’s assistant, then as a designer. He continues to seek a balance between photography and design. (Photo credit for rowing picture: Capt. Barry King of the schooner Mary Day)

When the web came along, he decided to learn a bit about it. Within a few days, he had created a web site. Not one he would let you see all these years later, mind you, but he realized that this was sure to be crucially important in the future.

Jim teaches photography for a week every summer aboard the schooner Mary Day, where he has also served as relief crew and sails a few times every summer.

A few years ago, he took up Shakespearean acting when he tried out for Hamlet with Camden Civic Theatre. He got a minor role and by the end of rehearsals had wangled his way into two other parts (finally doing Rosencrantz, the doctor and a knight). Since then, he’s had parts in As You Like It, The Merchant of Venice, The Taming of the Shrew, and King Lear.